Posted on November 16, 2020
Categories: FIFSW Students in the News

Virginia Isaac (MSW 2020) is a community social worker with the Government of Nunavut, but these days she operates out of Ottawa. The fall 2020 graduate of the University of Toronto’s Master of Social Work program supports people returning to the territory during their 14-day mandatory quarantine in the government’s isolation hubs.

“My job is to welcome new guests to the hubs, help them with their adjustment to quarantine, and do whatever I can to ease their stress during their stay,” says Isaac. “Isolation can be difficult, whether you’re travelling alone or managing the pressures of having your spouse and children living together in one room.” She does daily check-ins to monitor guests’ wide variety of needs, which range from specialized meals for their cultural and dietary requirements to safety, support, and mental health services. 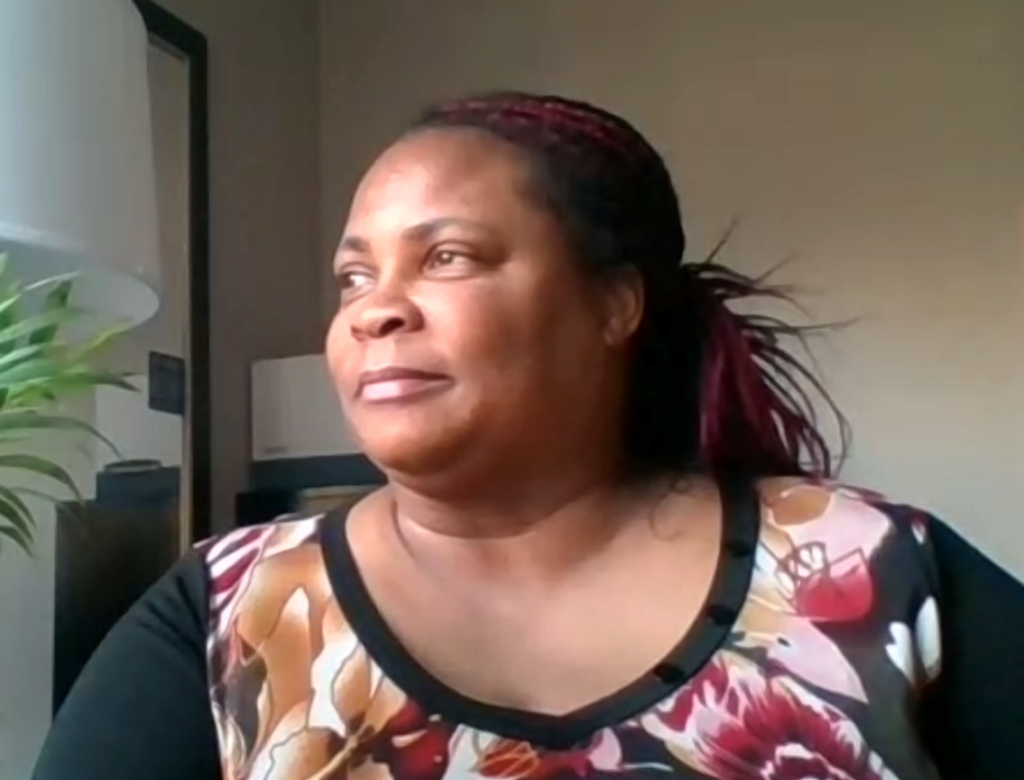 (Above: Isaac, in her Ottawa office; photo taken via zoom.)

There are also isolation hubs in Winnipeg, Edmonton and Yellowknife that serve as entry points to Nunavut, which has managed to avoid both the first wave of COVID-19. The territory’s first case was identified on November 6.  “When people are struggling with the demands of quarantine, I remind them that they’re making a positive contribution to preventing the spread of the virus,” she says. “Remembering the broader value and purpose of their sacrifice often helps.” Guests at the isolation hubs are frequently reminded adhere to public heath regulations, which include wearing a mask, practicing social distancing, staying in their bubble, and washing their hands frequently.

As for her own role as an essential worker and the inherent risk that involves, Isaac also takes a big-picture perspective. “I’m very proud to be among those making a difference in people’s lives during the pandemic,” she says.

Although there was no way to prepare for her role, since it didn’t exist before the pandemic, Isaac says her education and experience have served her well. As an advanced standing MSW student who came to U of T with a Bachelor of Social Work degree, she pursued the Social Justice and Diversity field of study at U of T’s Factor-Inwentash Faculty of Social Work. “A central emphasis in the program is recognizing clients’ unique life experiences and treating them as equal partners. This is the way I approach my relationship with every new guest at the hub.”

Isaac was a social worker with the Government of Nunavut for more than six years before doing her master’s. When she arrived in the territory in 2012, it was her first time in Canada’s Arctic. “It was a bit shocking at first in terms of the vast and untamed landscape,” she says. “But I took the time to get to know the culture and traditions of the Inuit, and their close relationship to the land.” She soon saw the similarities with her own childhood on the Caribbean island of Saint Lucia, where people in her rural village also have strong ties to the land.

Isaac was a teenager when she immigrated to Toronto, which she now considers home. But she spent several years in British Columbia studying, working, and vounteering with an intercultural and immigrant aid society which inspired her to becoming a social worker, where she forged strong connections with local Indigenous communities. She also worked for several years in health care in Toronto before moving to British Columbia.

“I’ve always had a strong interest in learning about and working with Indigenous Peoples in Canada,” she says. “My own experience as a Black woman and that of my ancestors is very parallel in terms of marginalization, poverty, discrimination and stigma.” For her Master of Social Work practicum, Isaac worked at a community organization serving the Black community in Toronto, where many of the clients were coping with these issues.

As for what she’ll do once the isolation hubs are no longer needed, Isaac can’t predict. But she says that doesn’t bother her. “My ambitions are many, but wherever I am and whoever I’m working with, I approach things with an open mind and a passion for helping people.”

Isaac can be reached directly via: virginiaisaac@hotmail.com