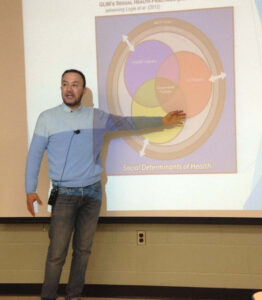 Gerardo has been working as an educator for 25 years in several countries. His educational projects have been implemented and evaluated in Chile, Mexico, Colombia and Canada. He has been working in the field of Sexual Health for the past 10 years, and has published in international book chapters edited by universities and numerous peer reviewed journals. He has developed theories and theoretical frameworks to better understand intersectionalities, sexualities, qualitative methodologies, epistemologies and sexual health practices. Gerardo has presented his research in countries such as Spain, Mexico, Colombia, Canada, Australia, and USA.

His education practice, pedagogy is as a constructivist (Piaget, Vigosky), and as a researcher, social constructivism guides his work. With a preference for interpretative methods, he has extensive experience working in community based research and education.

He sees education as a form of emancipation and empowerment, and has passion for Social Work and Health Sciences. His teaching experience, bilingual in Spanish and English, includes Jr. High School, to University-level, and with community and scientific stakeholders.

Gerardo is fully trained in the use of multiple intelligences, neurolinguistic sciences, and Freire in the classroom.

Gerardo has developed a Hand Mapping Qualitative Methodology for depicting narratives of sexual health trajectories and life events. The methodology has been presented in Barcelona, Switzerland and across Canada http://web.fhnw.ch/plattformen/sexualityandsocialworkconferences/conference-program/presentations/workshop2/presentation_gerardo_betancourt_SSW16.pdf