After the 2019 attacks on two Mosques in Christchurch, New Zealand that killed 51 Muslims, Amina Hussain, a PhD student in social work, was shaken. She and other Muslim students, including Mishal Dar, Syed Faruk and others, wondered about the support that their faculty and the broader social work community could provide. They were disheartened to find very little.

A social media post advocating for more support for those affected by Islamophobia by social work Professor Ka Tat Tsang was an exception. Tsang’s post inspired a classroom discussion that continued in meetings outside the class about how the Muslim student community at the Factor-Inwentash Faculty of Social Work could be better served. 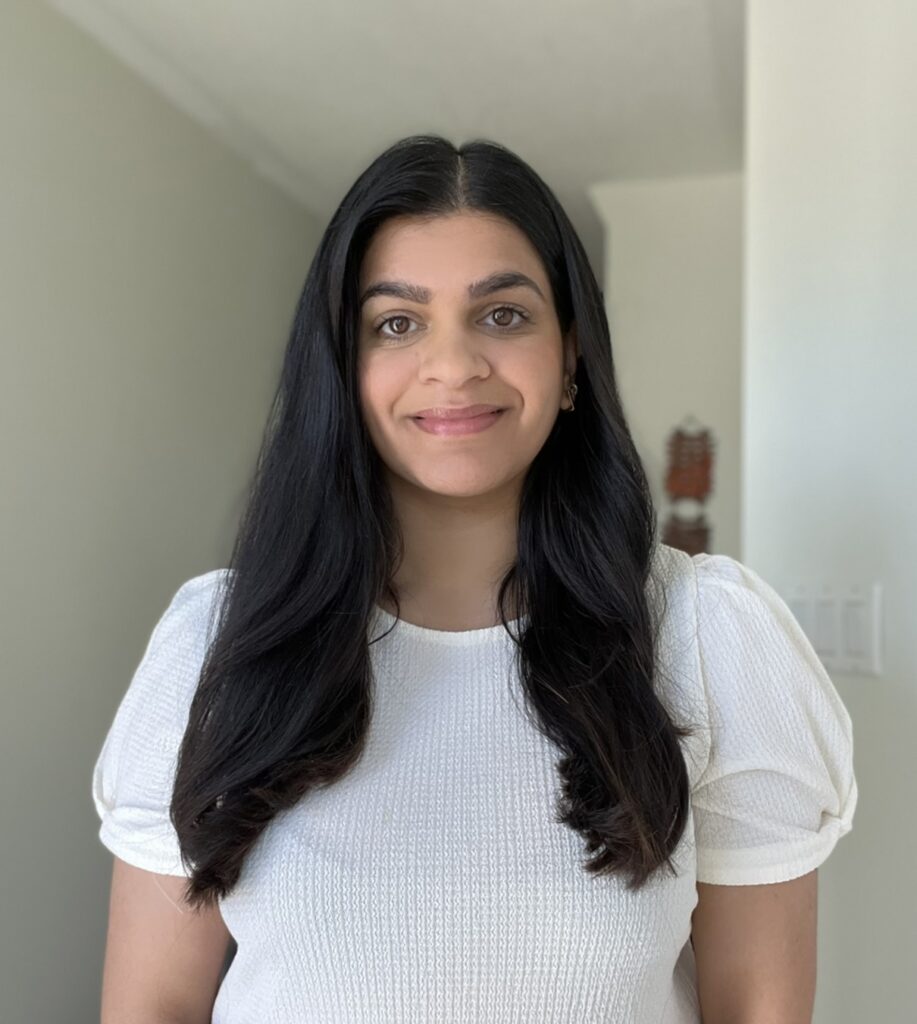 What started as a student-led initiative to create a Muslim student group quickly grew to a collaborative research project that will fill a gaping hole in social work research. Supported by a Social Sciences and Humanities Research Council (SSHRC) Partnership Development Grant, the study, now underway, will explore the social service needs of Ontario’s Muslim population and help social workers better understand the barriers Muslim people face in accessing culturally appropriate support. The research will ultimately inform recommendations on how to improve services for this diverse population.

“We always talk about cultural inclusiveness, and the importance of different approaches to care,” says Hussain. Unfortunately, she and her fellow Muslim students were not seeing their identities represented in the Faculty — or in the larger realm of social work research and practice.

“Faith-based service providers are strong support systems and sources of healing for many Muslim-identified individuals, but as Muslims who are also being trained in an evidence-based Western approach, we felt that there was a disconnect. Which identities are we privileging? And which identities are not included?”

These questions and others formed the inspiration for the SSHRC-funded project, on which Hussain is a collaborator; Dar is the project coordinator and Faruk, now a graduate, is a co-investigator. Tsang is the project’s principal investigator.

Other FIFSW faculty members joined the research team as well. Professor and Interim Dean Charmaine Williams and Associate Professor Michael Shier joined Faruk as co-investigators along with Muhammad Asadulla from the University of Regina.

“All the partnership relationships were established by our graduate students and we have seen overwhelming support from the Muslim community.” — Professor Ka Tat Tsang 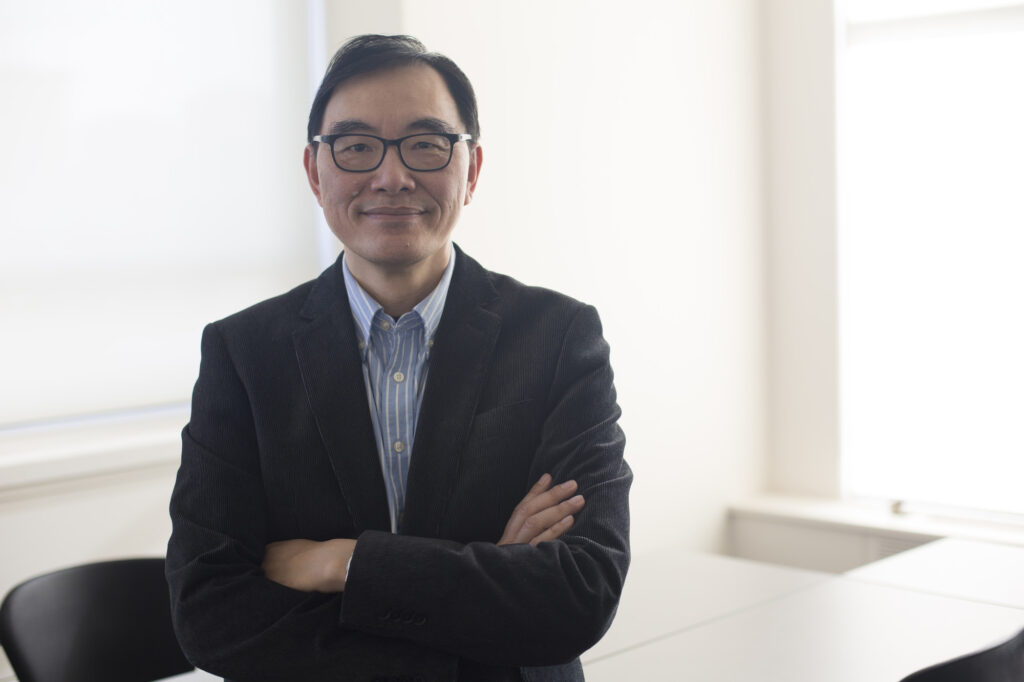 “I am privileged to be working on this project, which has served as a nucleus for a network of Muslim students from our Faculty,” says Tsang. “All the partnership relationships were established by our graduate students and we have seen overwhelming support from the Muslim community.”

Tsang was keen that the research be led by Muslim students and community members. Other collaborators include Muslim scholars such as Shaheen Azmi (one of the Faculty’s first visibly Muslim graduates who has done work on Islamophobia with the Ontario Human Rights Commission) and non-Muslim researchers such as Purnima George, who conducts Islamophobia research at Toronto Metropolitan University. Centering voices of community members over researchers has been key. The study is being led by a steering committee made up of community partners and academics in addition to the core research team.

The study’s researchers have also been working hard to reach Ontario’s diverse Muslim population. When they noticed that most of the focus group participants were South Asian, they reached out to Healing as One, a grassroots organization in Toronto’s Regent Park neighbourhood who helped them recruit Black Muslims. When they saw a lack of seniors, they engaged with the Islamic Foundation of Toronto, who are allowing them to set up a table during their seniors’ programs.

“Muslim voices have often been excluded in academic and community spaces, particularly when developing culturally inclusive care. When Muslims are included in these spaces, the community is often represented as a homogenous group. In reality, the Muslim community in Ontario is incredibly racially, ethnically, and culturally diverse,” says Hussain.

“Post-COVID, the challenges have really increased in terms of food insecurity, and the cost of living has gone through the roof. Housing and homelessness are big challenges.” — Azim Dahya 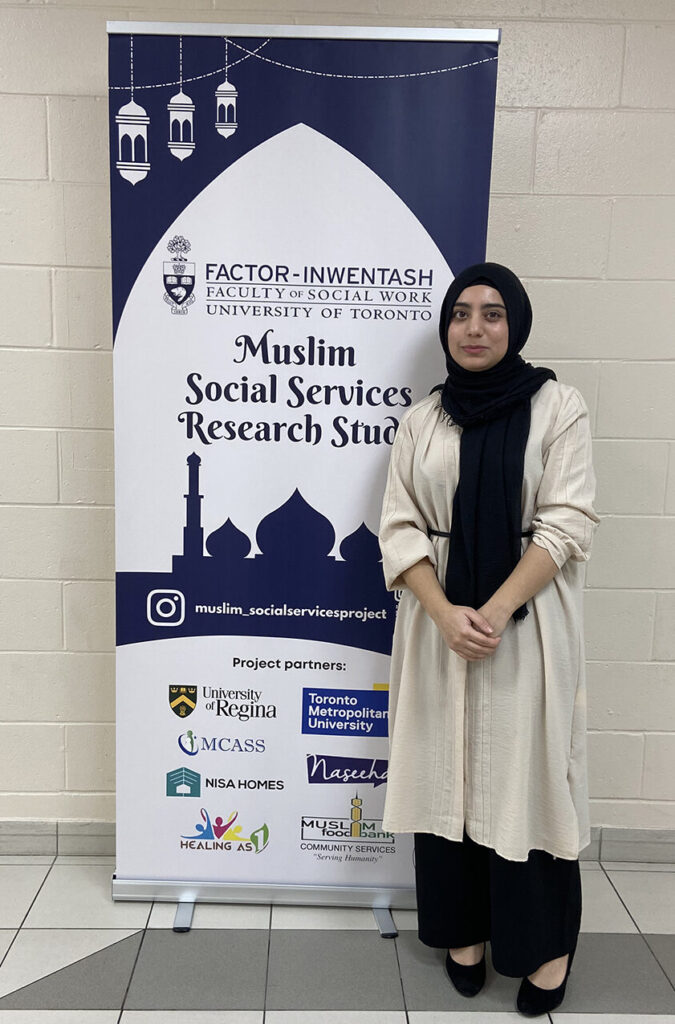 The organization’s CEO Azim Dahya sees first-hand how Islamophobia can worsen mental health, lower confidence, and make it harder for Muslim clients to secure employment. He hopes that this research project will expand the organization’s pool of Muslim-serving agencies for client referrals and help them gain new volunteers through community outreach.

“The more volunteers and resources we have, the more impact we can provide to our clients,” says Dahya. “Post-COVID, the challenges have really increased in terms of food insecurity, and the cost of living has gone through the roof. Housing and homelessness are big challenges.”

In addition to strengthening ties between agencies, Dar hopes their research will help Muslim-serving organizations better understand how to best support their clients, through “not just research articles, but also manuals in easy-to-read language for people on the frontlines.”

“Faith-based healers like Imams or Sheikhs are often the first point of contact for Muslim families or individuals in need,” says Hussain. “The local mosque can serve as a place of solace and comfort during challenging times. But as we know, there’s an increasing need for mental health support, particularly in the wake of the COVID-19 pandemic.”

She describes how racial trauma, Islamophobia, poverty, community violence, food insecurity, chronic illness, family conflict, immigration status, and precarious employment intersect to confound the mental health of individuals. “Faith-based healers are experiencing the weight of this,” she says. “They have to navigate these intersecting challenges with limited resources. This is why partnerships are critical for both individual and community care.”

“We don’t have many narratives around the merge between Islamic faith-based care and social work. That’s what really drives us.” — Amina Hussain

As Hussain and Dar dive into this research, they haven’t lost sight of their goal to build more support for Muslim students at FIFSW. Hussain hopes their work to help create a database of Muslim service organizations and educate social workers on the needs of Muslim clients can help facilitate more practicum opportunities for students interested in working with Muslim communities. She’d also like to see an increase in Islamophobia-focused course content, faculty workshops, awareness of Islamic events, and efforts to address Islamophobia when it happens.

The SSHRC research has already provided opportunities for Muslim students to gain valuable skills and connections. “Many of our research assistants work in the communities we’re trying to reach, and some are newcomers to Canada,” says Dar. “We hired them to build community capacity, but they are also building skills and research experience to move forward in their careers.”

In 2020, Hussain, Dar, Faruk and others who were part of the initial conversations about the need for better support for U of T Muslim students back in 2019 — including Mohammad Zafar, Zainab Kazi and Emad Alarashi (all now FIFSW alumni) as well as social worker and alumna Aicha Benayoune — established a new student group: the Muslim Human Service Alliance (MHSA).  Through its growing network of mosques and community organizations that serve Muslim clients, MHSA plans to support resource and capacity-building, advocate for equitable healthcare access, and recognize the value of Muslim voices in strengthening social services.

“The faculty has been around for 100 years, and this is the first student-led Muslim organization,” says Hussain. “We don’t have many narratives around the merge between Islamic faith-based care and social work. That’s what really drives us.”

She believes the work that she and her fellow collaborators are engaged in will contribute to a larger collective of change. “We want to serve as a beacon of hope to empower those of diverse Muslim identities and facilitate partnerships that go beyond the goal of one individual research project.”

Exploring the Social Service Needs of Muslims in Ontario:
Academic and Community Partners

Muslim or non-Muslim organizations interested in helping recruit participants for this study can contact Mishal Dar at mishal.dar@mail.utoronto.ca.

U of T students interested in getting involved with the Muslim Human Service Alliance can contact Amina Hussain, MHSA President, at amina.hussain@mail.utoronto.ca.