Ran Hu, a PhD candidate at the Factor-Inwentash Faculty of Social Work, was honoured with U of T’s Graduate Award for Scholarly Achievement in the Area of Gender-Based Violence at a virtual event marking the National Day of Remembrance and Action on Violence Against Women on December 6.

The Award for Scholarly Achievement in the area of Gender-Based Violence was established in 2016 to recognize students who have made distinctive contributions in gender-based violence research and prevention. Two awards are presented each year: one for undergraduate students and two for graduate students. Each student receives $1,500. 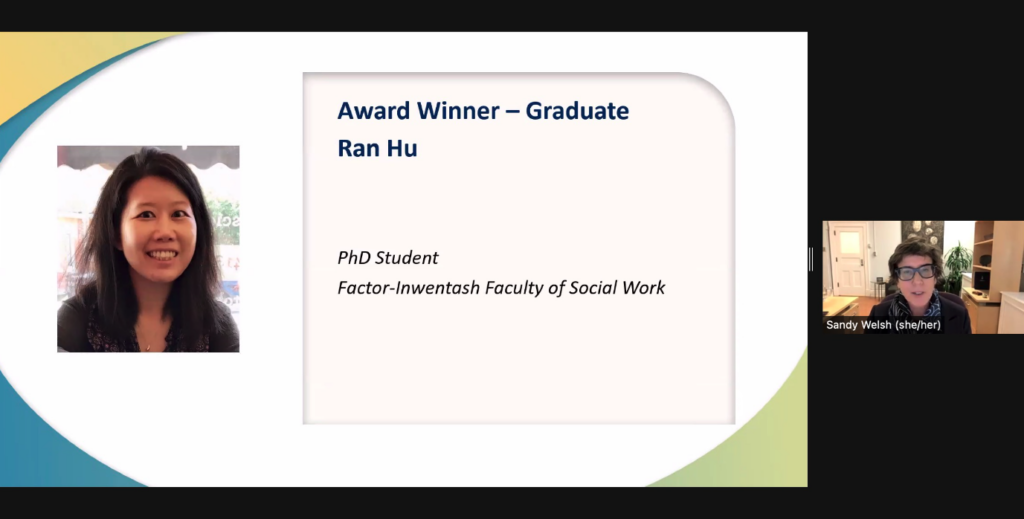 Ran Hu received a Graduate Award for Scholarly Achievement in the Area of Gender-Based Violence at a virtual event marking the National Day of Remembrance and Action on Violence Against Women.

Hu’s research has been focused on structural and interpersonal violence against women, policies on sex work and human trafficking, and victim (mis)representation issues in the North American anti-trafficking campaigns. Her scholarship is grounded in her commitment to raising awareness and addressing the intersectional structural inequalities that legitimize various forms of violence.

Hu has authored and co-authored several publications — including two articles in the highly competitive and interdisciplinary Journal of Interpersonal Violence based on a rare large-scale study to address intimate partner violence against women in China. Building on her publications in Affilia: Feminist Inquiry in Social Work, Hu’s doctoral thesis directly engages with advocacy against sex work criminalization in the US. Her innovative thesis research contributes to our understanding of the complex role of social media in grassroots organizing and public engagement in policy discussions. This research builds on her long-term commitment to advocating for sex work decriminalization and rights-based anti-trafficking.

In the scholarly work that she submitted when applying for this award, Hu discusses the misrepresentation of victims in educational messaging on sex trafficking promoted in the “end-demand” campaign in the United States. This work is situated in the broader feminist critical reflection on state/structural violence, epistemic injustice, and carceral interventions against racialized women.

More information and links to Hu’s research can be found here.

Congratulations to Hu on this well-deserved recognition of her work!