Donald Meeks — a Professor Emeritus at the University of Toronto’s Factor-Inwentash Faculty of Social Work — passed away peacefully on January 17 at 92 years old.

Dr. Meeks’ impact both locally and abroad as a teacher, researcher, activist, and leader with a strong commitment to social justice was remarkable. In 2006 he was awarded the Order of Canada in recognition of his illustrious career as a social work professor, a groundbreaking and internationally renowned addictions expert, and a leader in human rights and race relations. At the University of Toronto, the mark he left on students, faculty, and staff is indelible.

Dr. Meeks grew up in Pennsylvania’s declining steel towns, within a system that directed Black students away from academics. Regardless, his parents had high academic expectations. After excelling in high school, he received a scholarship to Hampton University in Virginia, where he flourished as both a scholar and campus leader. Inspired by both frequent encounters with discrimination and his father’s dedication as a preacher to helping others, Dr. Meeks pursued a career that would allow him to combat racism and serve those disadvantaged by systemic injustice. He received his Master of Social Work degree from Atlanta University and his PhD in Social Work from Smith College.

Following his PhD, Dr. Meeks accepted a cross-appointment at what was then the University of Toronto School of Social Work and the Addiction Research Foundation (ARF), now the Centre for Addiction and Mental Health. Over the course of his more than 30-year career he would inspire countless students, influence the social work curriculum, and enrich and lead the development of the addictions field both in Canada and worldwide.

As described in Martin L. Friedland’s The University of Toronto: A History, it is likely that Dr. Meeks was the first Black person at the University of Toronto to receive a tenure-stream appointment. He was also the first Black professor to attain the rank of full professor at U of T’s social work Faculty. While at U of T, he introduced courses on drug dependence into the social work curriculum and helped create the collaborative graduate program in Alcohol, Tobacco and Other Psychotropic Drugs (now the Collaborative Specialization in Addiction Studies). He also founded and chaired the social work Faculty’s Anti-Racism, Multiculturalism and Native Issues (AMNI) Committee, and served on U of T’s Race Relations Committee.

When Dr. Meeks started working at the Addiction Research Foundation, it had a strict medical model. He was a leader in conceptualizing addiction as a multifaceted issue requiring multidisciplinary team intervention. During his time at the Foundation, he became the founding director of the School for Addiction Studies and, in 1971, the first non-physician associate director of ARF’s hospital, which paved the way for other non-physicians to assume leadership roles.

Dr. Meeks found his international work particularly gratifying. He began to teach and consult on addictions in developing countries early in his career, during which he led the development of treatment and training systems in more than 40 countries. He was an early leader of the Caribbean Institute on Alcoholism and other Drug Disorders, a multi-year collaboration between CAMH, U of T’s social work Faculty and the University of West Indies. He also served as a consultant for the United Nations, the World Health Organization, and numerous governments and NGOs in Europe, Southeast Asia, Africa and the Caribbean.

After his retirement in 1993, Dr. Meeks continued to consult on anti-racism and addictions. “As a Black person, I’ve had an interest in equity and social justice all my life,” he said. “That was always a prime consideration in my work.” 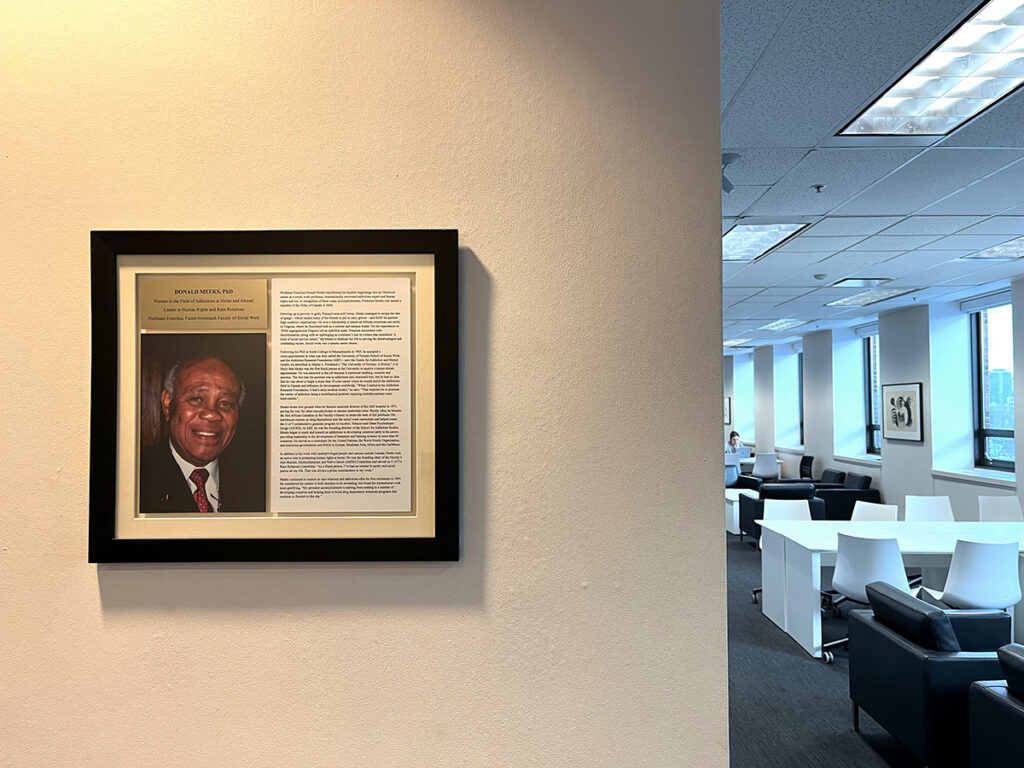 A plaque dedicated to Dr. Meeks hangs on the 7th floor of FIFSW’s building

A memorial service for Dr. Meeks is being planned for the spring.

For those interested in making a donation in his memory, Dr. Meeks’ family has suggested gifts to the Dr. Daniel G. Hill Sr. Scholarship at the Factor-Inwentash Faculty of Social Work. Those interested may contact Chantal Cory, Director of Advancement at chantal.cory@utoronto.ca or 416-816-8540. Online donations can be made on the University of Toronto’s website: https://engage.utoronto.ca/drhill