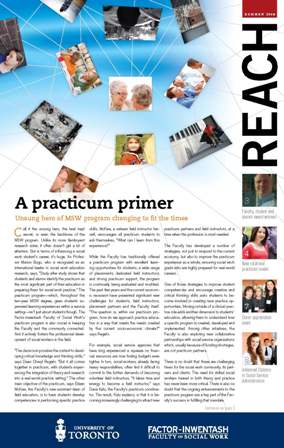 How do you convince an already time-strapped social worker to take on the extra responsibility of becoming a field instructor for an MSW student? Given that many social workers in today’s economy are being asked to do a lot more with less, it’s sometimes a tough sell to get them to take on a first-year student for five months or a second-year student for the entire academic year. But by offering a rotational model that cuts the field instructor’s commitment by at least one-third to one-half the time spent in a traditional practicum, the Faculty hopes more instructors will volunteer.

Instead of the traditional model in which students are placed in a single setting for the duration of their practicum, the rotational model sees students moving through generally two rotations of nine weeks each, or sometimes three rotations of six weeks each. The Faculty conducted focus groups with social workers and undertook consid- erable planning before implementing a pilot initiative in January 2008 that continued until May 2009. Dana Katz, practicum coordinator, judges the initiative a qualified success.

“The rotational model is really helpful for potential field instructors who work in larger teaching centres, such as health care institutions,” says Katz. “They just don’t have the time for a six-month commitment, but if you say ‘You can rotate with two or three other staff to teach a student and still give back to your profession without a huge time commitment,’ then they’re much more likely to be interested,” she continues. The model generally isn’t viable for smaller community organizations that simply don’t have the staff numbers, Katz says.

Students, especially those in their first year of the MSW program, can benefit too, Katz believes. “The rotational model gives first-year students a wider range of opportu- nities and competencies to begin to develop themselves as social workers,” she says. “There’s no better way to do that than by being exposed to widely different social workers, styles, modalities and client populations to give a great introduction to the field.”

Illana Perlman, a social worker in the trauma program and the educational coordinator at Sunnybrook Health Sciences Centre (one of the Faculty’s affiliated teaching centres), has been involved in developing the rotational model, along with Dr. Barbara Muskat, cross-appointed at U of T, and academic and clinical specialist at The Hospital for Sick Children. They have presented this pioneering Canadian social work model at major conferences and Sunnybrook has championed the
model; of the initial 14 rotational placements in Toronto in 2008, Sunnybrook was home to six.

“The notion is to focus on breadth of experience for the students, rather than depth,” Perlman says. “As far as possible we develop rotational cohorts that are connected. For example, a student may begin a rotation in the emergency department and then proceed to the burn unit, to see the progression of a patient who was admitted to the former and then transferred to the latter.”

In 2009, Sunnybrook also helped to pilot an inter-agency rotational model, with an MSW student spending the first three-month rotation at Sunnybrook, followed by the second three-month rota- tion at the Toronto Rehab Institute. “The student gained a sense of the larger picture by moving from an acute care centre to a rehabilitation setting, getting an appreciation for the continuum of care,” Perlman explains.

In their evaluations of the rotational model, field instructors say that because students have to “hit the ground running,” the model is better suited to students who are self-starters, flexible and independent learners. One such learner is Lina Neves, who, when we spoke to her, was just finishing her first-year practicum at Sunnybrook Health Sciences Centre. Following a rotation in neurosurgery, she was completing her second rotation in the nephrology department. Neves finds the rotational model suits her learning style, enjoying the faster pace of the practicum. “It’s given me a snapshot of two different areas,” Neves says. “I have increased access to more people and different styles—I don’t find it overwhelming, although it may not be for everyone.”

The rotational practicum is in its infancy at the Faculty, with only about five percent of placements using the model over the past year. Although she doesn’t believe the model will replace the traditional single placement practicum, Katz believes it is an excellent option to grow the pool of field instructors, and provide students with an increased range of experiences.

This article originally appeared in the Summer 2009 issue of Reach.