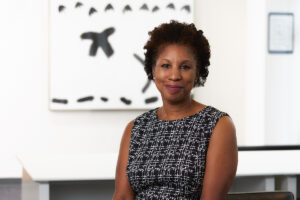 Professor Charmaine C. Williams joined the Factor-Inwentash Faculty of Social Work in 2002. On January 1, 2023, she was appointed Dean for a five-year term. Professor Williams is also holds the Sandra Rotman Chair in Social Work.

Dean Williams’ research focuses on health equity issues affecting various populations, including racial minority women, LGBTQ communities, and families affected by mental illness. As a social worker in the mental health care system, Dr. Williams worked with individuals, families and groups, and was also active in organizational change initiatives directed at increasing access for racial and ethnic minority populations. She has extensive experience developing and delivering professional education in the areas of anti-racism, cultural competence, mental health and addictions. Recent activities include serving on the expert panel for the Mental Health of Black Canadians Initiative at the Public Health Agency of Canada and serving on the Anti-Racism Advisory Panel that developed the Toronto Police Service’s race-based data collection policy. She is PI for the SSHRC funded project “United we stand, divided we falter: Advancing a family-centred agenda for research on caregiving.”

Prior to taking on the role of Dean, Williams was the Vice-Dean of Students at the School of Graduate Studies, University of Toronto. She has also held positions as the Anti-Racism and Cultural Diversity Officer (2003-2004), the Associate Dean Academic for Social Work (2009-2014), and the Provostial Advisor on Access Programs (2014-2015).