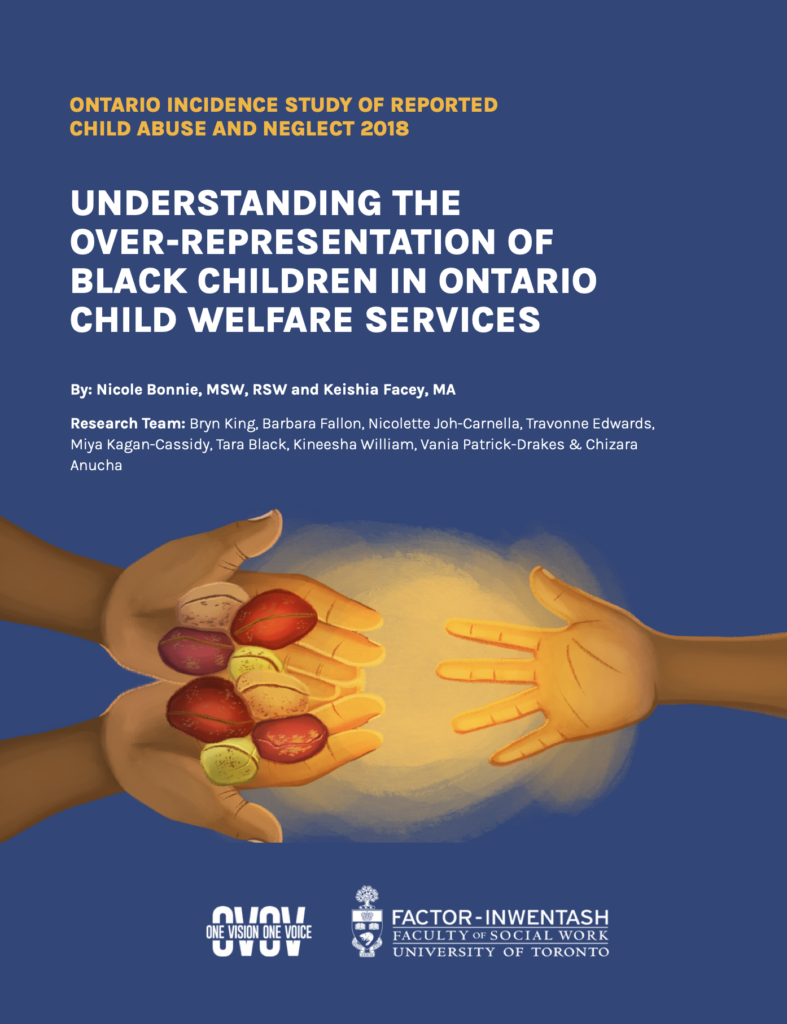 Black families in Ontario are more than twice as likely as white families to be referred to and investigated by child welfare agencies, according to a new groundbreaking report released by the One Vision One Voice (OVOV) program in collaboration with the University of Toronto’s Factor-Inwentash Faculty of Social Work (FIFSW).

After being investigated, Black families are also more likely to be required to receive ongoing, longer-term services and supports, rather than having their case closed. Meanwhile, Black children are two and a half times as likely to be placed in out-of-home care during the course of an investigation.

The report, titled Understanding the Over-Representation of Black Children in Ontario Child Welfare Services, clearly identifies race as the source of these disparities. Its findings are based on data from the Ontario Incidence Study of Reported Child Abuse and Neglect 2018 (OIS-2018).

“Our research quantifiably shows what Black communities have been telling us for years: that race is a significant factor in child welfare referrals and investigations in our province,” said co-author Nicole Bonnie, CEO of Ontario Association of Children’s Aid Societies (OACAS). “The good news is that the child welfare sector is engaged in anti-Black racism work through OVOV and other local equity initiatives. I have hope that outcomes will improve as we encourage the sector to use the OVOV tools to challenge systemic anti-Black racism, build community partnerships, and engage in meaningful organizational change. But, as our report illustrates, this problem can’t be solved by the child welfare sector alone.”

Bonnie co-authored the report with Keishia Facey, program manager for OVOV, an OACAS initiative led by the African Canadian Community that is dedicated to addressing the overrepresentation of African Canadians in the child welfare system. Bonnie and Facey worked with a team of researchers at FIFSW led by Dr. Barbara Fallon, Professor and Canada Research Chair in Child Welfare and Associate Vice-President of Research at the University of Toronto, to examine the OIS-2018 data through an anti-Black racism lens. The researchers’ goal was to better understand and demonstrate why Black children, youth, and families are overrepresented in child welfare in Ontario.

Key findings in the report include the following:

Contrary to what is often assumed by the general public, the data also revealed that child welfare workers who investigated families were less likely to note at least one child functioning concern in Black children compared to white children. Noted concerns could include an intellectual disability, a mental or physical health issue, or other challenges to one’s well-being. They were also less likely to note at least one primary caregiver risk factor in investigations involving Black families compared to white families. Family caregiver risk factors could include lack of social supports, cognitive impairment, or struggles with addiction or mental health.

“This finding disproves the assumption that disparities in income, education, and health lead to Black families’ disproportionate involvement in the child welfare system. In reality, our research has found that when the data is controlled for other factors, race emerges as the driving force behind these differences,” says Facey. “This data is critical to measuring progress, identifying key issues that require change, and pushing ourselves, our members, and our partners across sectors and government to do things differently.”

The study’s researchers have been able to identify specific points within both the service continuum and communities where anti-Black racism is driving the involvement of Black families in child welfare. OVOV plans to use the findings from this report to inform future priorities and initiatives, including an upcoming Disparity Mapping Project, to be completed in partnership with FIFSW’s Youth Wellness Lab.

“We are delighted to have the opportunity to partner with One Voice One Vision to unravel the important data contained within the 2018 Ontario Incidence Study,” says Fallon. “Our findings underscore the importance of working together to continue to identify Anti-Black Racism and to ameliorate its devastating impact.”

The OVOV team would like to extend a special thank you to the entire research team for their expertise toward the release of this report, including Bryn King, Barbara Fallon, Nicolette Joh-Carnella, Travonne Edwards, Miya Kagan-Cassidy, Tara Black, Kineesha William, Vania Patrick-Drakes, and Chizara Anucha.

*The OIS-2018 was funded by the Ministry of Children, Community and Social Services. Analyses in this report were funded by Professor Barbara Fallon’s Social Sciences & Humanities Research Council (SSHRC) Canada Research Chair in Child Welfare (#950-231186).

> Understanding the Over-Representation of Black Children in Ontario Child Welfare: Q & A with Keishia Facey, Manager for OVOV About a Groundbreaking New Report