Posted on September 6, 2018
Categories: Faculty in the News 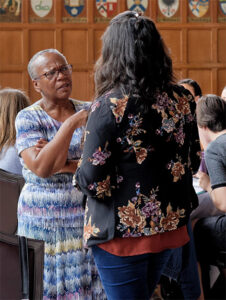 In her keynote on Thursday morning at the Factor-Inwentash Faculty of Social Work’s Introduction to Social Work conference, Dr. Bernard, citing her own mentors, called social work students to adopt the approach of positive disruption and affecting critical action through reflection. Social workers, she said, are not just advocates, but leaders. One of only three African Canadians in the chamber, Senator Bernard is the Chair of the Standing Senate Committee on Human Rights (RIDR).

Dr. Bernard recounted her childhood growing up in Nova Scotia, attending a segregated elementary school, and being the only black student in her high school class where she was bullied for excelling academically. Among a list of many firsts, she is the first African Nova Scotian to be promoted to full professor at Dalhousie University and to be appointed Professor Emeritus. Dr. Bernard is a founding member of the Association of Black Social Workers (ABSW) which helps address the needs of marginalized citizens, especially those of African descent. She has received numerous honours for her advocacy and community leadership, notably the Order of Nova Scotia and the Order of Canada.

Social Work student Yasmin Johnson was particularly moved by Bernard’s experiences as a black student in academia. “Just being a black-identified student at UofT, it was inspirational,” Johnson said. “It’s very appropriate that [FIFSW had] Dr. Bernard speak. It meant a lot that they asked her to be the keynote.”

With a warm personality and generosity of spirit, Senator Bernard offered experience and inspiration to a new cohort of social work students starting the academic year at the University of Toronto.